Amusingly, today I take my numbers from the Heritage Foundation. 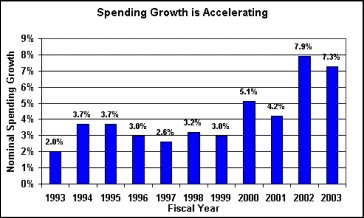 One might notice that back in the earlier years of this graph, when we had more Democrats in office, spending was lower (spare me the war excuse, I'm still not in favor of the damn thing) and taxes were... higher? Sort of. Taxes are funny in ways that only people who truly love numbers can understand. But they certainly weren't lower overall.

As I've said before, my daddy always told me that the difference between a Democrat and a Republican is that a Democrat will tax and spend, and a Republican will borrow and spend. Every day the world proves my father right.
Posted by The One True Tami at 8:35 AM
Email ThisBlogThis!Share to TwitterShare to FacebookShare to Pinterest