The Curse of the Black Trash Man

With the One True Tami (blessed be Her name) sailing off on vacation, I shall take this time to annoy you with some distressing news from the home front. My normal, carefully regulated, increasingly agoraphobic home routine has been upset to a distressing level. For those of you who don't know, as the years go by I have become more and more like Nero Wolfe, homebound through a combination of fear and antipathy toward open, public spaces or crowds of the great, unwashed masses. My work as a private marketing consultant and occasional freelance writer allows me to conduct virtually all of my business from my home.

For those of you who have routinely worked away from your residence, you might not imagine or appreciate the strange daily rituals and relationships which develop for the homebound. If you spend your days off at some office, factory or mall, you miss out on all of the activities which occur during your absence. The mail arrives six days per week, (at least for now) usually around the same time. You may know this only because it's waiting for you when you get home. I actually see the mailman - or mail woman, in my case - on an almost daily business and get to chat with her. Retirees often walk their dogs around the block on a regular schedule. I know them by name and occasionally join them with my Basset Hound. Meter readers, delivery vans, surveyors and political campaign workers prowl the suburban landscape and I inevitably run into them all.

One of the most regular events is the weekly pickup of trash and recycling materials by the municipal workers. As the appointed day arrives, I generally fret over whether to put the trash out the night before or wait until early the next morning. (The truck comes by at an obscenely early hour, but get up around 5:30 a.m. and keep my advantage in the battle.) During weeks when there is a government holiday on Monday the pickup is delayed by one day. On these occasions I wallow in a particularly morose pleasure generally available only to the homebound - I chuckle at the stupidity of my neighbors who lug their cans out on the usual evening, dooming them to sit at the curb for 36 hours, while I stand smugly on my porch secure in the knowledge that I'll catch them the next day.

I like the guys who work on the garbage truck. They all look somewhat like myself, except for being more muscular, weatherbeaten and scruffy, clad in overalls and carrying themselves with the bearing of those who get up early to do hard, often dirty work, braving the elements and performing an under appreciated service, without which society quickly grinds to a halt. They also differ from the stereotypical perception some people have of uneducated losers in the game show of life. They have government jobs which actually pay pretty well and carry full benefits. The hours aren't bad and a decent retirement program is provided. As I said, I've come to like these guys. At least until the last few weeks.

One of the scruffy, weather beaten and - most importantly - Caucasian guys who ride the truck has disappeared. I've not managed to work up the nerve to ask where he is or how he's getting on, but he's been replaced... by a black man. This is nothing short of a disaster. In the past I have been completely comfortable stepping out on my front porch with a cup of coffee and waiting for the trash truck to go by. I could give a cheery wave to the workers, ask how things were going, and promptly bring my newly emptied garbage and recycling bins back to the house long before any of my gainfully employed neighbors could manage to do so. No more!

You see, I too am white. (Or should that have read, "I am too white?" Well, white enough to pass muster for most people anyway. I'm certainly not going to be mistaken for any of the boys in the "hood.") Call it a case of deeply set, generational white guilt, latent racist tendencies or stark, glaring stupidity. Frankly, I don't know nor will I pretend to have some brilliant psychoanalytical explanation. What I do know, however, is that my routine is shattered. My coffee cup and I are out on the porch as usual, but at the sound of the approaching truck I turn and flee back inside. I peer through the curtains and wait for the vehicle to disappear around the corner before furtively sneaking out to retrieve the cans.

Why? The answer is both unfortunate and obvious. It seems that I'm perfectly fine with the idea of a white man showing up to haul off my refuse, but when an African-American shows up being paid to perform the same task, I fold up like cardboard boots in a rainstorm. Rather than an average homeowner greeting another hard working member of the community, in my mind's eye I have suddenly become a sneering, plantation era taskmaster, tossing his buggy whip from hand to hand as he oversees the non-voluntary labor. "Say there, boy! Make sure you get all of those shrimp shells from my luxurious dinner last Monday that are scattered by the curb. And don't let me catch you eating any of the scraps or it's the lash for you! Do a good job and there'll be an extra portion of gruel for you on Sunday." It's simply too much to bear.

What's to be done? The solution is clear. I'll give it a few more weeks to see if the regular guy was just off on holiday and returns to work. If not, I'll need to figure out a way to explain to my wife why we're moving.
Posted by Jazz at 8:27 AM No comments:
Email ThisBlogThis!Share to TwitterShare to FacebookShare to Pinterest

I'm outta Jersey starting tomorrow morning for a whole week.
This time I'm spending my time on a ship. I like ships.
Posted by The One True Tami at 2:56 PM No comments:
Email ThisBlogThis!Share to TwitterShare to FacebookShare to Pinterest

Bush's 'War on Terror' Comes to a Sudden End

WASHINGTON - President Obama yesterday eliminated the most controversial tools employed by his predecessor against terrorism suspects. With the stroke of his pen, he effectively declared an end to the "war on terror," as President George W. Bush had defined it, signaling to the world that the reach of the U.S. government in battling its enemies will not be limitless.

While Obama says he has no plans to diminish counterterrorism operations abroad, the notion that a president can circumvent long-standing U.S. laws simply by declaring war was halted by executive order in the Oval Office.

I'm not openly weeping with relief, but it's close.

For years I wrote blog posts saying that the government was committing crimes. For years it didn't matter. All of a sudden we have a President who knows that it does matter. I feel funny writing this, like I'm about to be all sunshine and roses and say that President Obama is perfect. Of course he's not perfect, he's a politician. I'm sure over the coming years he'll do a lot of things I disagree with. This one, though, this one makes me so happy.
Posted by The One True Tami at 7:36 AM No comments:
Email ThisBlogThis!Share to TwitterShare to FacebookShare to Pinterest

Really glad all the passengers got out alive.

...from the plane crash. I don't think that the movie had passengers.
Posted by The One True Tami at 11:07 AM No comments:
Email ThisBlogThis!Share to TwitterShare to FacebookShare to Pinterest

War sucks because it means that people are unwilling to compromise without killing each other. Usually when I have a disagreement that I can't win, I give in, although with a terrible lack of grace, and I'm bitter about it basically forever. Still, no loss of life there. I wish that nation-scale conflicts could be solved without death.

I don't have a link for that one, I just tripped this morning on the way to the car, and that sucked. It sucked a lot. I'm not broken, just bruised, but I think I'm going to hold a grudge against the piece of plastic I tripped on forever. Forever! You're dead to me, wedge-shaped dark gray piece of plastic that someone left lying on the ground by the curb!
Posted by The One True Tami at 9:01 AM No comments:
Email ThisBlogThis!Share to TwitterShare to FacebookShare to Pinterest

Sharon tagged me with a meme. I don't like to tag people, because I'm shy about strange things, but I hate to miss out on showing you all how bad I am with a camera phone. 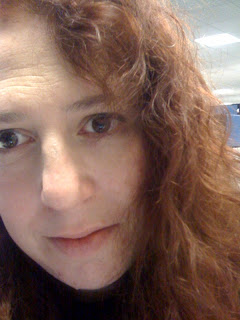 Posted by The One True Tami at 2:39 PM No comments:
Email ThisBlogThis!Share to TwitterShare to FacebookShare to Pinterest

When Selecting a Mate...

... one thing you should always check very early on - pretty much on the first date - is that they don't have a birthday that falls in January or early February. If they do, you can date them, but you shouldn't move in with them or marry them. Because, if you do, the day will eventually come when their birthday party falls on the same day as a playoff game or the Super Bowl.

All of this, of course, is just a nice way to say that my lovely wife, Georg, (who reads and comments here often enough) is celebrating her birthday today. It's one of those "big ones" that ends in a zero, but since I've learned enough by now not to get more specific, I'll just guess that it's twenty.
Posted by Jazz at 12:12 PM No comments:
Email ThisBlogThis!Share to TwitterShare to FacebookShare to Pinterest
Newer Posts Older Posts Home
Subscribe to: Posts (Atom)