The Whole Country Has a Short Attention Span

It's not just me.

While Clinton continued to separate herself from opponents who have called for an immediate withdrawal of U.S. troops from Iraq — saying, “I stand for ending the war in Iraq and bringing our troops home, but I also understand that it’s going to take time” — former Sen. John Edwards of North Carolina zeroed in on Clinton’s vote for a congressional resolution that declared Iran’s Revolutionary Guard a terrorist organization.

That vote, he said, cleared the way for President Bush to invade Iran.

OK, so here it is, 2 years after many of us crazy lefty bloggers started complaining that our country was gearing up for war with Iran, and now it looks like we weren't precisely crazy, so much as early. Well here's what I want to know:

Anyone remember Afghanistan?
Posted by The One True Tami at 7:53 AM No comments:
Email ThisBlogThis!Share to TwitterShare to FacebookShare to Pinterest

(Another short note from Jazz.)

I imagine a lot more of this happens than we get to hear about, but I've been expecting it for years.

CHICAGO (AFP) - A pack of hunting dogs shot an Iowa man as he went to retrieve a fallen pheasant, authorities said.

James Harris, 37, was shot in the leg while hunting with some friends on Saturday afternoon.

"Harris reportedly went to retrieve the bird, placed his gun on the ground and crossed the fence near the muzzle end," the press release said.

"When he crossed the fence, hunting dogs stepped on the gun, which discharged and struck Harris in the left calf at a distance of roughly three feet."

If you find this surprising, you shouldn't. On the topic of hunting with canines, you'll often hear people talking about how much the dogs "enjoy" it. "Oh, they're bred for it! They really love getting out there and tracking down the [insert name of doomed target here] on a brisk fall morning!"

Bullshit. Look, people... I happen to own a Basset Hound. Yes, yes... they are supposedly bred to be hunting dogs. But I'm here to tell you that this hound is one of the laziest bastards you're ever likely to meet. He sleeps about twenty hours a day and only gets up to either bark at me if his food and water bowls are running low or to crap on the basement floor. When I get up in the morning and want him to go downstairs with me (so he won't wake up Georg later) I practically need a tazer to get the lazy mutt on to his feet and moving.

You think these dogs want us dragging them out at four a.m. to get dumped into a truck to go run around in some freezing, wet field and chase down animals they don't even get to eat after we shoot them? Ha! Reading this story, all I can say is that Mr. Harris was lucky the dog didn't shoot him in the face. (The dog's name wasn't Cheney, was it?)
Posted by Jazz at 9:03 AM No comments:
Email ThisBlogThis!Share to TwitterShare to FacebookShare to Pinterest 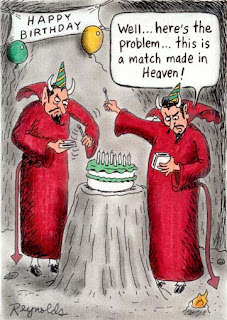 Posted by The One True Tami at 8:57 AM No comments:
Email ThisBlogThis!Share to TwitterShare to FacebookShare to Pinterest

(Jazz here, checking in on all you Tami fans.) You can build the best floats, train the baton twirlers to perfection, hire top notch clowns and get all the necessary permits, but the one thing you can always count on is that somebody will come along to piss on your parade.

With its snack-food sponsorship, Democratic and Republican affiliations, and Sen. Larry Craig as a possible running mate, Stephen Colbert's run for the presidency is hardly serious business. But the joke could be on Colbert if federal election officials decide his candidacy is for real.

If his campaign plays out the way he's indicated that it will, Comedy Central and Colbert's sponsor, Doritos, could be violating federal laws that bar corporations from backing political campaigns, election law experts say.

Given the quality of candidates being shoved onto my plate by both parties, I had pretty much resigned myself to doing a write-in vote for The One True Tami (blessed be Her name) for president next year. Then, along came Stephen Colbert - a breath of fresh air in a stagnant, if not poisonous political environment. What is his platform? Who cares! He's got to be better than Hillary or Rudy.

Colbert only tossed his hat in the metaphorical ring last week, but a recent Rasmussen poll of likely voters from across the country already shows him grabbing 13% of the vote in a hypothetical three way race against Clinton and Giuliani. (Hillary came in with 45% while Rudy took 35%.) Is Colbert violating "the law" by accepting a $3,500 donation from a nacho snack chip company? Could Comedy Central be liable for allowing him to use his show to flack for his campaign?

Maybe. But compared to the beltway bandits he's up against, if that's the worst sin he commits then he's likely the closest to sainthood of anyone in the running. Sure, the entire thing may be a joke, but he's certainly gotten me to thinking... we already elected an actor as President, not to mention the Governator's mansion in California. Hell, we had a professional wrestler too. Fred Thompson is currently running second place to Rudy and he was an actor on Law and Order. (I'm not really a presidential candidate, but I do play one on t.v.)

Could Stephen Colbert really do worse than the current office holder or the pack of pork fed career politicians seeking the White House? If nothing else, the press conferences would be worth watching. Hey, FEC! Lay off Colbert and go figure out some real vote fraud problems in Florida and Ohio before we have a repeat of 2000.
Posted by Jazz at 6:28 AM No comments:
Email ThisBlogThis!Share to TwitterShare to FacebookShare to Pinterest

We Have RULES Here, Damn It!

In my inbox this morning:

George Bush wants to take away health insurance from tens of thousands of New Jersey's poorest children. It's not right, and I won't let it happen.

I'm sure you've heard about Bush's recent veto of extra federal funding to the SCHIP program that provides health insurance to America's most needy families. But before all that even happened, he had already issued an illegal proclamation that would immediately cut health care coverage for over 10,000 New Jersey kids.

It's absolutely outrageous. George Bush and the Republicans in Washington are taking an indefensible stand against health care for kids. They'd rather put political and ideological gamesmanship ahead of bipartisan solutions to protect our most vulnerable children.

That's why I filed a lawsuit on behalf of the people of New Jersey. I know George Bush thinks he can do whatever he wants to defy the wishes of the American people and a bipartisan majority in Congress. But the truth is, we have rules and laws in this country. He can't just do whatever he wants. So I'm taking him to court to hold him accountable.

I don't have to tell you how high the cost of living is in New Jersey, compared to other parts of the country. Ever since the SCHIP program started, we have sought and received approval from the federal government that allows our state's FamilyCare program to cover children at higher family income levels than those covered in other states.

It's bad enough that George Bush won't authorize the funding to expand one of our state's most successful and bipartisan programs, but in an August letter, he reversed years of established policy and took away our ability to cover kids in families making more than about $51,000.

He can't do that unilaterally. There is an established legal process that must be followed to change the way this program works.

It's simply incomprehensible. I never thought I'd see this president circumvent the rule of law to throw the most vulnerable kids off the health insurance rolls.

It's a shameful act, and it demands a response. I'm taking the Bush administration to court and standing up for New Jersey's most needy families.

I hope I can count on your continued support.

I haven't looked up the details, and yet I totally believe that GWB decided to write a letter dictating what individual states could do.

You can't do that, George. You can not give federal funding, but you can't stop a state from providing more state money for a program that's not illegal. We're a republic, not a sand box; not even the President gets to be King of the Hill.
Posted by The One True Tami at 10:56 AM No comments:
Email ThisBlogThis!Share to TwitterShare to FacebookShare to Pinterest

You know, I dislike the fact that President Bush vetoed the SCHIP (State Children's Health Insurance Program). I think that program has real merit, and should be put into action. So does Congress, because it got to the President for Veto in the first place. I think we should do something about it. So does Louise Slaughter, according to the email I got from her. There's a web site all set up to tell your Congressional representatives that you want them to vote to overturn that veto.

According to the site, every single member of Congress, both the House and the Senate, have received correspondence about this. I just sent them some more. I have this crazy dream, see, where our system of checks and balances actually check and balance something. Wouldn't that just be extra ginchy?
Posted by The One True Tami at 10:07 AM No comments:
Email ThisBlogThis!Share to TwitterShare to FacebookShare to Pinterest

I haven't written anything for a week. Work continues to suck up my time (I should be coding right now!). At least it's Friday. Have a beer, or something.

Posted by The One True Tami at 8:29 AM No comments:
Email ThisBlogThis!Share to TwitterShare to FacebookShare to Pinterest

I've been ignoring you again, I know, and I'm really very sorry. Work has been busy, which as we all know, can sometimes happen. Normally, I'd catch up at night, but I've been completely indulging in TV premieres. So far Journeyman doesn't look too bad, but it pretty much is a blatant rip-off of Quantum Leap. Heroes isn't letting me down, the pilot of Carpoolers was reasonably amusing (there's a no-pants guy, a classic comedy winner), and, of course, I remain addicted to Dancing With The Stars.

But things are still going on in the world, whether or not I write about them. You know how I said that Journeyman was pretty much Quantum Leap reheated? Well, sometimes things in the real world happen the same way. Over at Blanton's and Ashton's this morning, I found the post Plus ça change, plus c'est la même chose.

It is time, therefore, for us to face the stark reality of the difficult situation before us without the false hopes which predictions of military victory and assurances of complete independence have given us in the past. The hard truth of the matter is, first, that without the wholehearted support of the peoples of the Associated States, without a reliable and crusading native army with a dependable officer corps, a military victory, even with American support, in that area is difficult if not impossible, of achievement;

...
Posted by The One True Tami at 8:30 AM No comments:
Email ThisBlogThis!Share to TwitterShare to FacebookShare to Pinterest
Newer Posts Older Posts Home
Subscribe to: Posts (Atom)