I'm impressed that something that looks so mediocre can be so incredibly fattening.
Posted by The One True Tami at 9:07 AM No comments:
Email ThisBlogThis!Share to TwitterShare to FacebookShare to Pinterest

Whoa - They Got Caught?

I quote the insightful Traveling Wilburys, "In Jersey, anything's legal, as long as you don't get caught".

NEWARK (WABC) -- Two mayors were among the dozens arrested this morning in a major federal corruption sweep in New Jersey.

According to officials the dozens of suspects, including several rabbis, were being brought to FBI Headquarters in Downtown Newark.

My first reaction is, "Wow. I wonder how much they were getting away with." I also wonder what will happen as a result of these arrests. Will there be convictions? Will things change? Will things speed up in local government because of these arrests, or slow down? Will money get to places that it was being blocked from, or will it just get misdirected elsewhere?

I never know the answers to those questions, but I always suspect that the "misdirected elsewhere" scenario is the one that plays out. I'm cynical.

Nothing drives home to me the corruption in my lovely state so much as my daily trips to the mailbox. I get mail, my housemate gets mail, and the previous residents get mail - to all of their aliases. I'll never forget when I saw a letter from the Department of Community Affairs addressed to someone who doesn't live in my house. I thought calling them would be wise. They informed me that a home inspection was scheduled because of the tenant receiving section 8 assistance that lived at my address. Boy, was I surprised! I was even more surprised when the office handled the situation like absolute idiots. I was put on hold, and the office worker came back on the phone saying, "I've just contacted Ms. J****, and she says that she only moved out last month!". Wow. I mailed them a photocopy of the documents that show that I bought my house 6 months before that. No home inspection ensued. I find myself wondering if the previous owner of my house still gets that money from the state, even after all that. I wonder what was in the envelopes from the Social Security office that I sent back marked, "Return to Sender: Addressee not living at this address". I wonder how many people are ripping off the state every day.

And then I'm surprised that somebody got caught.

My second reaction to that story was, "Wow, I bet if my dad sees this, he'll be really upset about the rabbis part".
Posted by The One True Tami at 9:12 AM No comments:
Email ThisBlogThis!Share to TwitterShare to FacebookShare to Pinterest

If you know me at all, you know that when the going gets tough, I get baking. This weekend's project was the King Arthur Flour Ancient Grains Blend bread recipe. See the blog post about it, here, if you like.

The picture on the blog is high, light-colored, and very white-bread looking. Mine is not. I can attest, though, to the bread being delicious. I marvel at the fact that it weighs a ton, so is very satisfying, and at its astonishing 5 grams of protein per serving. Astonishing! Anyway, did I mention that mine does not look like white bread? 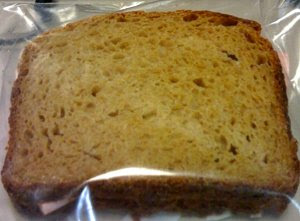 Yeah, I probably should have taken that out of the sandwich bag before photographing. I'm really lazy. The sandwich, by the way, is pesto, american cheese, and low-salt ham. I haven't tasted it yet, but it sounded pretty genius when I was putting it together this morning while the coffee brewed.

Ah, there you go, a whole 3-5 minutes without thinking about people getting shot. You're welcome.
Posted by The One True Tami at 8:59 AM No comments:
Email ThisBlogThis!Share to TwitterShare to FacebookShare to Pinterest

In Which Jazz Praises Joe Biden

If nobody else, at least our Vice President has something on the ball.

“And folks look, AARP knows and the people working here today know, the president knows, and I know, that the status quo is simply not acceptable,” Biden said at the event on Thursday in Alexandria, Va. “It’s totally unacceptable. And it’s completely unsustainable. Even if we wanted to keep it the way we have it. It can’t do it financially.”

“We’re going to go bankrupt as a nation,” Biden said.

“Well, people that I say that to say, ‘What are you talking about, you’re telling me we have to go spend money to keep from going bankrupt?’” Biden said. “The answer is yes, I’m telling you.”

In the bad old days, we had to burn the village to save the village. Today, we must spend more money on the nation that's going bankrupt to avoid bankrupting the nation.

Say what you like about the current administration, you have to love Joe Biden. The guy is in the last job he's ever going to hold, he's enjoying the hell out of it, and he doesn't give a rat's arse who knows it. You go, Joe.
Posted by Jazz at 6:53 PM No comments:
Email ThisBlogThis!Share to TwitterShare to FacebookShare to Pinterest

OK, today I saw the question, Should We Sell Choice to Get Change? National Health Care, as a concept, apparently gets bogged down by the concept that abortions would be effectively paid for by all taxpayers.

We should fight.
Posted by The One True Tami at 9:49 AM No comments:
Email ThisBlogThis!Share to TwitterShare to FacebookShare to Pinterest

Personal Blog Gets Even More Personal

An open letter to the asshole who threw a rock through my father's front window last night:

Dear asshole who threw a rock through my father's front window last night,

What the hell is wrong with you? He's an old guy who was just sitting in his house, minding his own business. He's not feeling well, and he has to get his gallbladder taken out tomorrow, so you come along under the cover of darkness and do physical damage to his house? What kind of dick are you? Oh, wait, I know, you're the kind of dick who breaks other people's things and then runs away. Perhaps dick is the wrong word for you, perhaps the phrase "dickless coward" fits better.

Sincerely - and I MEAN that,
Tami

Yes, I do indeed feel better having written that where the world can see it.
Posted by The One True Tami at 8:39 AM No comments:
Email ThisBlogThis!Share to TwitterShare to FacebookShare to Pinterest

OK, the sad truth is that I don't know what I can add,but I feel an obligation to post, to communicate with you stalwart few who continue to check in.

No one ever needs to say anything else about Michael Jackson, but if I were to give an opinion, I'd say that it's sad that so many people of astounding talent end badly after too short a run.

When I was a little girl, I wanted hair just like Farrah's. It's the truth.

Ed McMahon is a giant in my memory. Once again, as a little girl my impressions were indelibly formed. He just made Johnny Carson look short.

Also RIP, Karl Malden, Billy Mays, and thousands of others that we didn't hear about.

Hooray for Al Franken! Just 7 months to decide that one, it went so fast! (not) Did anyone else see the statement he made about actually sleeping with his own wife? No one sees that coming from a Senator! Someone I know isn't a fan of his, and posted a photo to a bulletin board of Franken wearing a diaper and bunny ears, holding a teddy bear lying on the floor of a nursery next to a big package of Luv's. Congratulations, Senator Franken, you're the first elected official able to pose like that without anyone even blinking.

Finally, to leave you with an actual original thought, I baked a brioche loaf on Sunday, and for lunch tomorrow before I leave for the barbecue, I plan on toasting two slices up, spreading them with a lovely French soft cheese, and then a bit of spiced pear chutney, topping them with a couple of slices of prosciutto, and feeling REALLY smug about it.

Everyone have a happy holiday.
Posted by The One True Tami at 8:58 AM No comments:
Email ThisBlogThis!Share to TwitterShare to FacebookShare to Pinterest
Newer Posts Older Posts Home
Subscribe to: Posts (Atom)