Who's the March Hare?

Today I read something that I wish to share. From "Obama's Strong Marriage Produces White House Drama, Dysfunction":


The Tea Party and all its Mad Hatters emerge to bedevil him.

The Tea Party, as far as I know, takes their name from the historical Boston Tea Party. It's an iconic image of the common man fighting for his rights against oppressive tyranny that has pervasively wound itself into even the most minute aspects of everyday life. Twisting it an re-associating it with the surreal afternoon ritual from Alice in Wonderland pretty much made my day.
Posted by The One True Tami at 9:53 AM 4 comments:
Email ThisBlogThis!Share to TwitterShare to FacebookShare to Pinterest

Recently, I've been involved in a conversation with a group of people who are white-hot furious with the President for not taking immediate and decisive action regarding the 9/11 attack in Libya this year. They have taken the phrase "bump in the road" as a grievous insult.

I just can't. So many people have made stupid metaphorical references to the "Road to peace in the Middle East" and the "bumps along the way" that I'm numb to it. It's an awful phrase, and it minimizes the importance of human life, and at this point, it's overused, as well, but it just doesn't fan the flames of anger in my soul.

When speaking directly of those that lost their lives this September 11th, the president was somber and respectful. He spoke calmly and politely at their funeral. he stood at attention while their flag-draped bodies were loaded into hearses by Marines.

I didn't want to hear "Oh, no, you don't!" Because we are not the parents of the world. We are not reactionists. We understand that violence is not the answer that we want to give, if we want a less violent world.


The strongest weapon against hateful speech, Obama said, is "not repression, it is more speech."

"On this we must agree: there is no speech that justifies mindless violence," he said. "There are no words that excuse the killing of innocents. There is no video that justifies an attack on an embassy. There is no slander that provides an excuse for people to burn a restaurant in Lebanon, or destroy a school in Tunis, or cause death and destruction in Pakistan," he added.

"It is time to leave the call of violence and the politics of division behind. On so many issues, we face a choice between the promise of the future, or the prisons of the past," he said. "We cannot afford to get it wrong."

When we get it wrong, more people die.
Posted by The One True Tami at 10:37 AM 1 comment:
Email ThisBlogThis!Share to TwitterShare to FacebookShare to Pinterest

Folks, I am living in La La Land. I got an email today about affordable housing being offered in my county.

That's right, "affordable" housing costs a minimum of $690 a month, before utilities. I bet my friends that make about $600 a week are so happy to hear it. I wonder if they meet the "program criteria".
Posted by The One True Tami at 2:57 PM No comments:
Email ThisBlogThis!Share to TwitterShare to FacebookShare to Pinterest

I just read this: Obama who? Gay marriage foes seek to extend gains, and I have to say this, again, I just have to.

Stop it. Stop trying to dictate which person can marry which other person. The ONLY person you get to decide whether or not gay marriage is right for is YOURSELF. People marrying each other when neither of them is you is NOT YOUR BUSINESS. Even if it's your kid, or your brother, or your mom, it's NOT YOU.

Your right to flail your arms, buddy, that ends at the nose of others. If you promise not to mess with adults that want to live as a family and mind their own business, I promise to not to force you to marry someone of the same sex. Oh, wait, NO ONE WAS EVER DOING THAT.

Imagine how angry I'd be if I was gay? Honestly, I don't know why there aren't more homosexual violent rampages, they way they get treated most of the time.
Posted by The One True Tami at 10:41 AM 2 comments:
Email ThisBlogThis!Share to TwitterShare to FacebookShare to Pinterest

Still Down With OCD

Know what bothers me about this ad? 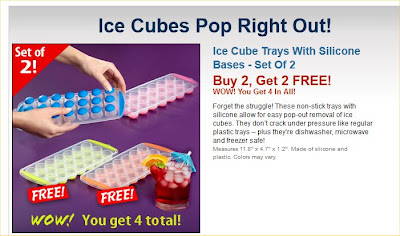 Those aren't cubes.
Posted by The One True Tami at 3:59 PM 2 comments:
Email ThisBlogThis!Share to TwitterShare to FacebookShare to Pinterest

I just spent a few minutes clicking "report abuse" on Yahoo! comments. I was reading the article about Maher giving Obama's PAC $1 million, and a lot of the people making comments are conservative Obama-haters. That's fine. You think that small government works better than big government, and I disagree, and neither one of us can prove our points to the satisfaction of the other.

The people who made comments about the white comedian being stupid for supporting the black Muslim, though, those guys got reported.

Disagreeing with me is one thing, but being intentionally stupid is abuse. Stop abusing me, idiots.
Posted by The One True Tami at 12:04 PM No comments:
Email ThisBlogThis!Share to TwitterShare to FacebookShare to Pinterest
Newer Posts Older Posts Home
Subscribe to: Posts (Atom)