So That's My Problem

A person devoted to luxury and pleasure.
Posted by The One True Tami at 8:54 AM No comments:
Email ThisBlogThis!Share to TwitterShare to FacebookShare to Pinterest

This means I bake a lot.

Yesterday I had the unreasonable urge to make cream puffs. It was suggested to me by a friend when I expressed the desire to bake something complicated. OK, she suggested croque en bouche, but I didn't get past the cream puff stage. Still, that's a pretty good stage!

I pre-heated my oven to 425F, then boiled 6 Tablespoons butter, 1 Tablespoon sugar, 1/8 teaspoon salt in 1c of water. I turned off the heat and added about 3/4 cups flour. I say about because I start with 1/2, and then add teensy bits until it's right. That's how I deal with humidity differences and baking. I incorporated the flour and put the pot back on the heat until I had a beautiful shiny dough ball. I dumped the pretty dough in the mixer bowl and let it cool off for a few minutes. I cracked 4 large eggs into a cup measure and discovered that they were a whole liquid cup. What were the odds? I added the eggs about 1 egg at a time while the mixer mixed on low. I scraped down the sides and gave it a good shot of speed until the dough looked very beautiful to me. I plopped it into a ziploc bag, clipped off the corner, and piped golf-ball-sized lumps onto my silicone mat.

Don't do that, this sticks to silicone. No, I don't know how that's possible. Use parchment.

I put the lumps on a cookie sheet into the hot oven. I set the timer to 10 minutes. I got out the ingredients for chocolate pudding, plus some kirsch. I'm too lazy to tell you how to make pudding right now, that's for another post. I'll just tell you that I use skim milk instead of whole milk or cream or half and half. I made chocolate pudding. I added kirsch. It's yummy. I put it in the fridge to chill up.

When the 10 minutes were up, I turned the oven down to 350 and turned on the light so I could check for golden brown-ness. Oddly, this occurred at about 9 minutes, 50 seconds, so I let it go the full time. I removed my new puffy pastry shells, and poked them with a knife to let out the steam. They were lovely! Look! 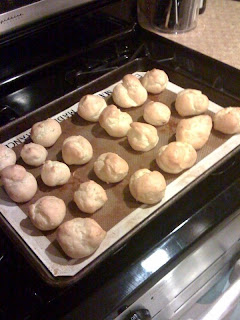 Anyway, after everything had cooled and chilled, I plopped a bunch of pudding into yet another ziploc bag, pumped some pudding into the shells, and made a pretty pile. 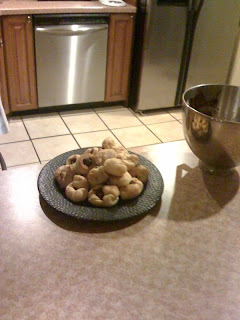 Anyway, the ending of this story is that there are cream puffs in my fridge, and that while baking is a science, if you don't know how things are supposed to look, you really can't make them correctly. I feel really bad about not taking a picture of the dough stages, now.

Anyway - cream puffs!
Posted by The One True Tami at 2:37 PM No comments:
Email ThisBlogThis!Share to TwitterShare to FacebookShare to Pinterest

Jazz here. (As the title might have already led you to believe.) I was on the phone last week with The One True Tami (blessed be Her name) talking for a very long time about really not very much at all, but it led me to some realizations. You shall now be burdened with this information.

First of all, I obsess over things. I'm also paranoid. (And I mean that in the medical sense, not in the Comedy Central, did that guy dip his chip in the nacho cheese twice sense. I once began testing various beverages in my house to find out if somebody - narrowed down to my wife or two of my best friends - was slowly trying to poison me.) The major problem with paranoids with a tendency toward obsession is that you eventually begin to obsess over being paranoid. But enough of that. I'll start boring you before too long if I stick with that line of thought. (OH MY GOD! Are they getting bored????)

Anyway... the point is that I've come to realize that I've spent a great deal of my half century on Earth veering off in different directions, all in the name of "refitting my priorities" or "sorting out what's important" or "dropping what doesn't work." All of those sound like fine and noble pursuits. The problem is that they don't translate very well into practice... at least not for me. I'm currently in the middle of a two week hiatus from pretty much "everything that doesn't directly pay me cash."

This break was allegedly to allow me to dive into and wrap up a couple of very important projects and reevaluate the various activities which have been clogging up my days to the point where I was getting stressed out. Many of those activities were not doing anything for my family life or my career. I enjoyed them for the most part, but only in small doses. Too much on my plate, even if it's all absolutely optional, was driving me to distraction.

So what did I wind up doing with all of this free time? I'm up to a level two farm in the 1990's vintage PlayStation One game, Monster Rancher. I've decided that I like the series "Scrubs" so much that I've ordered them all on Netflix and am watching the first season front to back. In short... I dropped the other things which were cluttering up my life and eating my time, and immediately found new, equally useless things to fill in the free hours.

What does a hiatus fix? At least for me... nothing. Not a damned thing. So, rather than dropping everything and spending days at a time in fruitless navel gazing, I really need to just do the things I need to do, then do some of the things I want to do, and if the latter builds up to the point where it becomes stressful, I need to say no to some of them.

Ok.. maybe I did fix something after all. I would explain this further, but I need to stop writing now before I become even more paranoid about something else. I have corn on the cob cooking on my grill right now. For all I know, one more paragraph and the whole freaking house will be engulfed in a deadly inferno.
Posted by Jazz at 3:28 PM No comments:
Email ThisBlogThis!Share to TwitterShare to FacebookShare to Pinterest

I'm just here to wish Jazz good luck in his quitting smoking endeavor. It's a noble pursuit.
Posted by The One True Tami at 2:42 PM No comments:
Email ThisBlogThis!Share to TwitterShare to FacebookShare to Pinterest

Here's a news flash which will elicit virtually no sympathy with the assembled masses. For those of you who weren't aware (and why would you care?) unlike the One True Tami, I have remained one of those disgusting people who smoke cigarettes for almost my entire adult life. I stopped 18 days ago. I was under the impression that if you made it through three and seven days, those were the big barriers. Today my willpower is starting to crack. It's would be hugely disappointing to have a setback after getting more than two weeks under my belt.

I'm white knuckling it here, so cross your fingers and grit your teeth for me.
Posted by Jazz at 2:28 PM No comments:
Email ThisBlogThis!Share to TwitterShare to FacebookShare to Pinterest

Technology I Don't Get

OK, so I'm reading an article on how in Windows, when you hide known file type extensions, people can name their viruses virus.txt.exe and change the icon so that unwary people are fooled into clicking on it.

Why did they hide the file extensions? If I'm looking at a file name, I want to know what kind of file it is, don't I? I never got what that was *for*, you know?

Does anyone know why you'd want to do that?
Posted by The One True Tami at 3:06 PM No comments:
Email ThisBlogThis!Share to TwitterShare to FacebookShare to Pinterest
Newer Posts Older Posts Home
Subscribe to: Posts (Atom)